Hi all, as you can see, I’ve added a brand new match with Brute Baynard. I’m going to offer it for free on 3/1 as a FREE Club Firestorm Streaming Video. I think it’s a good faith offering to make up for the lack of updates.

The lack of updates is an issue I’ll be tackling more aggressively. It was a variety of things ranging from a potential work related issue I was waiting to see how it panned out, to a bit of seasonal depression, I was working out for a bit and wanted to debut a brand new body- but I failed miserably, a couple planned shoots that failed miserably. It all just lead to me being very unmotivated, and the time just slipped away. I suck, but I shall suck no more.

I’m going to be filming more new content for the site, and do my best to go back to the twice a month updates. Forgive me if it doesn’t happen in month one. I’m going to be looking for some new talent, or at least new to me talent, for the Firestorm site.

But that brings me to my next question. I’ve received some feedback that some of you don’t like the format of Club Firestorm, so I’m wondering if we should change things up. I asked before about a Premium Membership and got some interesting feedback, but decided not to act at the time. But going forward, what would you like to see?

The most common request has to do with offering more free video content. I’m not opposed to doing so, but it needs to make sense for me to do, I’m a single person doing this, I don’t consider myself a wrestling company or business, I have a small following of fans that I market to and I’m happy to do so.

I think offering a standard membership and a different membership option or two makes the most sense, that way the people who like things the way they are, don’t get things changed up on them, but I can cater to whatever the largest majority of people want with an expanded membership. I think the tiered membership option would work best with a larger company like BG East but I’m interested to know what you all think. I know offering more free content will add to the growing piracy issue that plagues me, and every other wrestling producer out there, but I don’t want a few assholes ruin things for everybody else.

I’m spending tonight working on a normal sized Club Firestorm update that should be ready for tomorrow. I just realized as I was prepping the match that the lightning was way off for my match with Brute, so I’m trying to adjust the video now so it looks better.

I just got back from a 2 week work trip in Florida, I will be writing a separate blog about that along with some behind the scenes photos, photos from some matches I did, and some photos from a live show that I was on that benefitted the Ft. Lauderdale Pride Center. 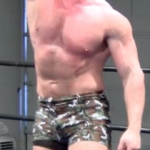 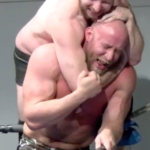 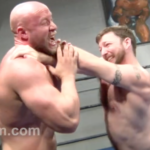 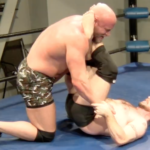 The monster of muscle, Brute Baynard is lurking in the ring waiting for Jonny. Completely out matched, and out muscled, Jonny attacks Brute from behind with a sleeper hold! What unfolds next is Brute’s worst nightmare, Jonny repeatedly and relentlessly tries to KO the muscle boy with a variety of sleeper holds. It takes a lot to bring the big man down, but Jonny is up for the challenge.

*PLEASE NOTE: This video is going to be a FREE STREAMING VIDEO for Club Firestorm Members as of 3/1/18. If you want to watch it while it’s streaming for free, you can, but to own it forever you will need the download. 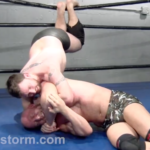 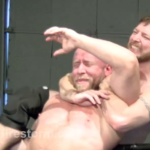 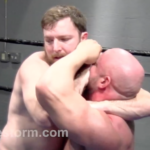 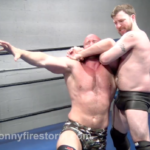 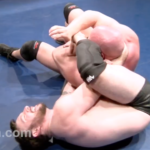 I’m keeping this brief, I’ll be posting a new match later tonight. I’ll also be adding a CF Blog update about the status of Club Firestorm, changes I’m working on, a general update. I’ll be polling existing users about several issues and ideas I have regarding the membership area. I’m recommitting to making Club Firestorm an intimate quality alternative to the bigger wrestling websites, with my unique themes, intense action, and innovate match ideas.