Click here for the match description, more photos, and of course to purchase the match. 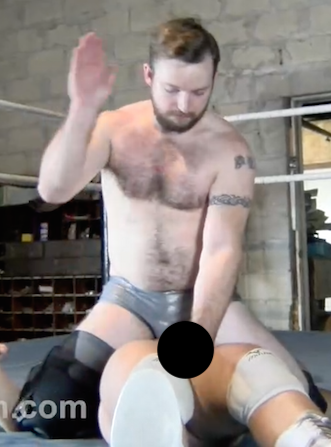 What’s new with me? I was hoping by now that I’d be back in the full swing of things. Everything was trending that way. I was wrestling in private matches, I’m back in the gym, losing weight & building muscle, I had a full slate of custom videos upcoming, and I had nearly two weeks full of wrestling to look forward to for a BG East shoot and a quick trip to help my buddy Cameron out with some filming. The first day of the BG shoot went great, I wasn’t wrestling, but I was helping behind the scenes. Then day two happened, I don’t know what I did but all of a sudden my foot was sore. No big deal. By the end of the day I couldn’t walk. I just figured I tweaked something filming and I’d be fine. Besides, I had a flight the next day to go to Cameron’s. By the time I arrived at Cameron’s I realized it wasn’t a tweak. I was totally useless in my hotel room with my foot up the majority of the time. I wasn’t able to help the rest of the BG filming. It was good seeing some old friends while I could, but definitely a bummer to miss out on the action.

I felt like I was getting better, so I tried putting some weight on it (using my crutches to support the majority of my weight) and walk. That was a mistake, I’m back at square one. I definitely have a doctors visit in my immediate future, I probably should’ve gone weeks ago. I was hoping to do a birthday bash taping. It’s always a good excuse to have some friends come in, we get some wrestling in and go out after for a night of shenanigans. I don’t see myself being better in time for that. I’m trying to keep myself motivated enough to hit the gym a few times a week and just use the machines, but I’ve been pretty disheartened by everything lately. Hopefully by this time next month I’ll have a new match posted. Probably slightly chubbier than I wanted to be.

I hope everybody has a good rest of their summer, and I hope to be back on my feet squashing some jobbers for your enjoyment soon.